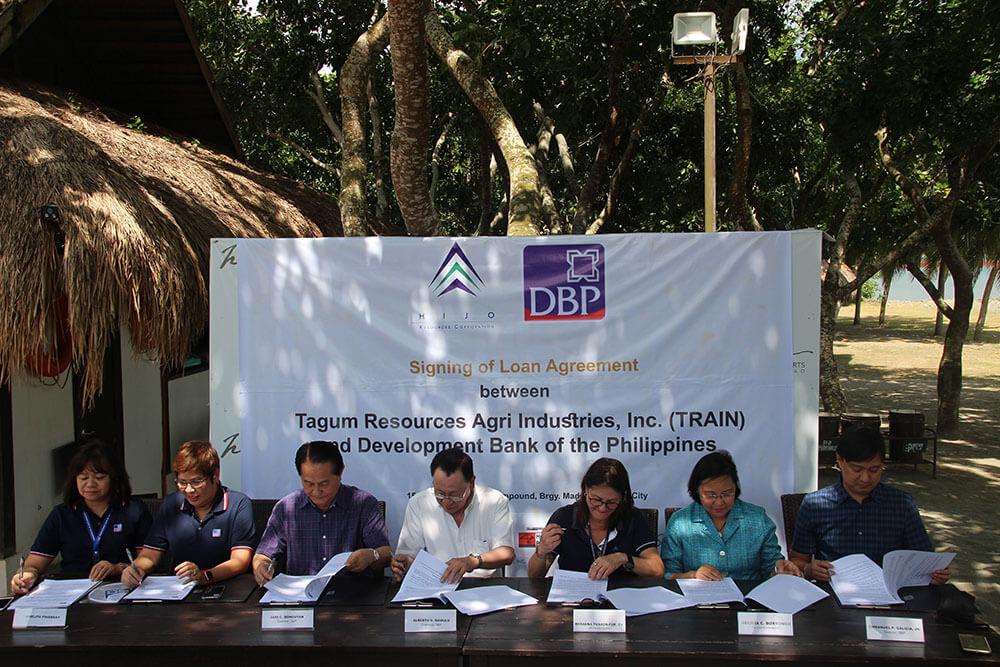 Train is the agribusiness company of the Hijo Resources Corporation (HRC) and it is establishing this digitalized plantation design in Trento, Agusan del Sur, naming the expansion project Tren2.

HRC’s Train is in a 455 hectares banana plantation in Tagum City, Davao del Norte, which produced 1.7 million boxes of cavendish bananas in 2016 or an equivalent of 4,000 boxes per hectare per year. It is serving Japan, China, and the Middle East markets. The banana plantation that it is developing with the help of DBP will be in a 3,000 hectare tract of land. It envisions to produce nearly three million boxes of quality cavendish bananas in a year for the initial 700 hectares that it will be developing in the near-term.

The Tren2 project will be developed in three phases.

“I think it will have a great impact on the Philippine economy,” DBP Chair Alberto Romulo said.

“Not only will it impact the Philippine economy, but the whole of Asean,” he added.

Despite portents of doom, volume of production actually went up by 3.1 percent in the last quarter of 2017 from 2.33-million tons for the period October to December 2016.

HRC Chief Executive Officer Rosanna Tuason Fores explained that Tren2 will be applying new technologies to produce more quality bananas from less banana plants or hills. It will feature a one of a kind planting design that will have 1,800 hills per hectare as against the 2,500 hills per hectare in Tagum with the same output.

With its earlier partnership with the Department of Science and Technology (DOST) and the University of Southeastern Philippines (Usep), the plantation will be using a mobile phone aided pest and disease identification app, which will be made available to farmers and growers.

Last December 1, 2017, HRC signed an agreement with DOST and Usep to develop a technology that will help banana growers immediately identify threats of Sigatoka and Bunchy Top viruses in banana plants through DOST’s Collaborative Research and Development to Leverage Philippine Economy (Cradle) program.

Cradle seeks to create a synergy between the academe and industries to translate technologies into real world applications. Under the partnership, Usep took on the challenge to produce a disease visualization application (DVA) software, on top of the publication on banana diseases early warning system, and information and education materials for the DVA.

It is this technology that will be fully utilized in Tren2.

“We’re very excited to partner with the Hijo Group, and Train in particular, with this loan transaction because it gives us the opportunity to demonstrate DBP’s commitment to further develop and agri-business sector,” DBP President Cecilia Borromeo said, while appreciating the presentation made by Tuason Fores on how Tren2 will be rolled out.

Among others, this plantation will not be using aerial spraying methods and will instead use tree-specific disease controls by using mulchers and tractor guided sprayers. It will also be using the technology of VRM Biologik PTE of Singapore. VRM Biologik is a leading provider of microbial formulations for organic recycling, advanced soil and water remediation, and agricultural support programs. VRM Biologik harnesses naturally occurring microbes to do without chemical inputs, and in the process creates cheaper organic waste management systems. Using its wastes, the plantation generates the base material for maintaining a healthy soil consequently healthy harvest.

This expansion is seen to generate employment opportunities in Barangays Cuevas, Sta. Maria, Salvacion, and San Isidro, which will be hosting the plantation.

It will also stimulate the economy there and bring focus on sustainable farming methods.

“It is a great opportunity for the bank to creat possibilities to better Davao del Norte, Tagum City and even Agusan del Sur and Agusan del Norte,” Borromeo said.

Earlier on, Tuason Fores has been focusing on reinventing the banana industry, firm in the belief that the industry cannot be resuscitated by using the same solutions already tried before and that the industry can only be brought back to its glory years if stakeholders come together to build the industry as one, and not as individual plantations with well-kept secret technologies and researches.