“Making the conservation of diversity a goal in everything we do would indeed be a fundamental shift. But anything less would be an abdication of our obligation to pass on to future generations a world of undiminished options, and of our moral responsibility as travelers on the only planet known to support life.” – John C. Ryan in Life Support:

“This project is actually my design and creation – in partnership with a select few people who possess the same mindset,” says Harry D. Morris, a marine biologist. “I have always wanted to make a real difference in what I do and I strongly believe that this project can flourish and last for generations, long after any of our lifetimes.” 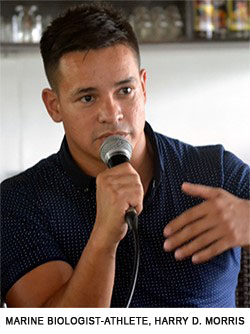 I had the opportunity of meeting Morris when I accompanied a group of journalism students from Ateneo de Davao University visiting Tagum City in Davao del Norte. The trip was part of their community exposure in order for each group to come up with a glossy magazine.

Our first stopover was Banana Beach Resort, one of the business endeavors of Hijo Resources Corporation. It faces Davao Gulf, “one of the most diverse marine ecosystems in the world,” according to the World Wildlife Fund.

Davao Gulf may look stunning but it is in deep trouble, literally and figuratively. “Hijo is situated in a biodiversity and economic hotspot,” Morris says. “I could see the 4-kilometer stretch of the resort’s coastline is in a state of decline for a long time.”

The Hijo River, which originates from Compostela Valley, passes the corporation’s 760-hectare property. During heavy rains, the river brings with it topsoil from logger-over mountains.

“The sediment had buried everything and was too dynamic to allow seagrass to take root. The coastline area had retreated by over 100 meters with a loss of 20 hectares or more over the last decade,” Morris says.

It is here that Morris launched the Trinity Project in November 2016. Initially, he was thinking of rehabilitating only 200 square meters. But as months passed by, more areas were added. Today, it occupies 120 hectares: 20 hectares of mangrove forest, 80 hectares of seagrass meadows, and 20 hectares of coral reefs habitat.

How he got involved into the project is an interesting story in itself. He was attending a tourism conference in General Santos City. He was one of the resource persons. It so happened that Rosanna Tuason-Fores, Hijo’s chief executive officer and president, was also there. 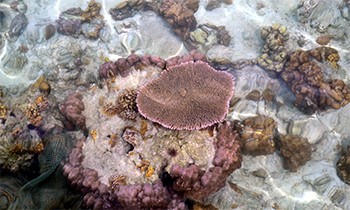 Coral reefs which are not in good condition

They talked and during their conversation. He found out that she was looking for someone who could help her rehabilitate coastal area of Banana Beach Resort. And it just happens that he was also looking for such kind of endeavor. The rest, as they say, is history.

“Rosanna has always had a strong connection with the sea and its beauty,” Morris says. “She is very aware of the practices that need to be in place to ensure the co-existence of business and the environment.”

On why it is called Trinity, it’s because it involves the three coastal ecosystems: mangroves, sea grasses and coral reefs. “The coastline is in urgent need of protection from erosion,” he points out. “Coral reef structures will help break and disrupt wave energy below the surface. The sea grass meadows will buffer the wave energy against the sediment and slow down the movement of the water. The mangroves will dissipate the wave energy with their prop roots, pneumatophores and trunks before the wave reaches the shore.”

Currently, Morris is trying to rehabilitate the damaged coastline. Not far from resort, he has already placed 20 artificial reefs – called “bommies” – which were constructed from recyclable scrap metal and porous stones.

Once the damaged coastline has improved, the next thing he will do is to improve the biodiversity of this part of Davao Gulf. “These habitats will support fish larvae, which is important for next generation stocks within and outside of the gulf,” he says. 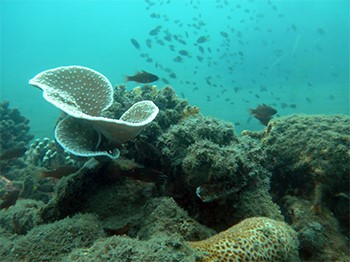 But his long-term plan is this: “The end goal is to rejuvenate the area to return to its former self. I want this to become sustainable in all ways: ecologically, economically and socially. The newly-created habitats will thrive and sustain the locals who rely on it but using methods that will benefit them financially with no negative environmental pressure.”

Morris talks really like a pro. After all, he graduated in 2006 with honors degree in marine and freshwater biology from University of Essex in England. It was only later on that I found that he is also a rugby player; in fact, he is a member of the Philippine Volcanoes.

“I still have yet to complete my PhD as I focused on my athletic career for over 11 years now,” he says. “But I will definitely be completing it once my projects are up and running.”

He talks fluent English as he grew up in Wales but his mother is a Filipina, the former Pilar Dionson. “My mother’s family had a rice milling business and a store. Her father was also a farmer,” Morris reveals in an exclusive interview.

His father is a British named Toby Morris. “He is a farmer in United Kingdom but was working as an oceanic surveyor when he met my mom, who was then studying,” Morris says.

The union was blessed with five children. Harry is the eldest; he also has a brother who is a rugby player and a graduate in Sports Science. He has three sisters: the eldest is a nurse who graduated from United Kingdom. The middle one has Masters of Engineering while the youngest is studying classics in Liverpool.

“I’m immensely proud of my family,” says Morris, who was born in Dumaguete City. “Our mom’s goal was to make us successful in our studies, which most Filipino mothers want of their kids.”