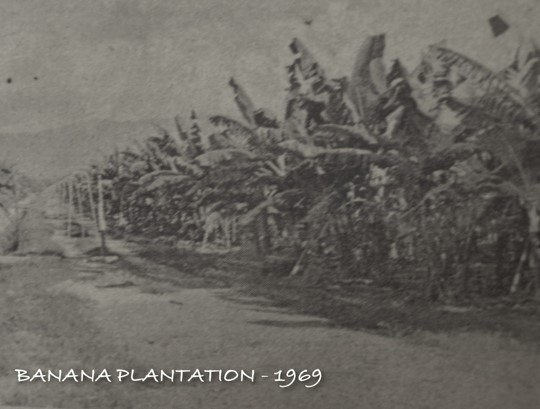 1959, in the Philippines, there was a group of Americans led by William Odell, who acquired and eventually sold their 2,200 hectare landholdings to four (4) companies: Hijo Plantation Inc., Twin Rivers Plantation Inc., Apo Fruits Corporation and Utley Plantation, Inc. Since 1930, the land has been used for abaca, rubber, coconut and tropical fruit plantation.

In 1966, Odell sold all companies to another American group headed by Ned Putnam. With Sam Fukuda, their manager, he included a new company named Fuji Fruits Co.

Hijo started the propagation of Cavendish bananas, through Apo Fruits Corp. from seedlings brought in by Fukuda from South America.

Apparently, the attempt to propagate Cavendish bananas failed and Putnam’s holdings were about to be foreclosed. In 1968, Jose “Boy” Tuason, Jr. bought the Ned Putnam holdings through Tuason Enterprises, Inc. Hence, the Tuasons became the first Filipino owner of the land previously owned by Americans. Subsequently, Jesus V. Ayala was appointed a manager of the new company.

Boy continued the cultivation of Cavendish bananas and this time, it was a success. The production of export grade Cavendish bananas started, and Hijo became the first in the country to succeed in this venture.

In 1969, Hijo partnered with Philippine Packing Corporation, the Philippine subsidiary of Del Monte International (DMI) for the marketing, financial and technical services. With DMI’s banana technological expertise, the cultivator of bananas was accelerated. Hijo sent its first shipment of Cavendish bananas to Japan. The Philippine Banana Industry was born.

Still, after Atty. Boy’s death, hard as it is, everything continued as it should be.

In 1972, Hijo registered its banana operation at the Bureau of Investments (BOI) under a Preferred Non-Pioneer status allowing for the full development of its banana lands. Simultaneously, Utley Plantation was dissolved.

On the other hand, the Philippines dislodged Taiwan, and Ecuador in 1973, as the biggest suppliers of banana to Japan.

In 1982, the partnership with DMI was cancelled. The functioning marketing merger of Davao Fruits Corp., Hijo and Twin Rivers as one of the four large banana exporters to japan started. Known internally as DAHITRI, the group included Sumitomo Fruits and Fuji Fruits as their Japanese partners. The group now owned 6,400 hectares of banana land with export targets of 15 million boxes per annum.

Berth No. 2 of the Hijo Pier was completed.

Profit growths reached unprecedented levels for the consortium from 1983 to 1991. At the behest of the Fuji Group, the general management contract of Tuason Del Rosario (TDR) was terminated. By then, Jesus V. Ayala (JVA) Management Corporation took over.

Back in 1988, Republic Act 6657 known as the Comprehensive Agrarian Reform Law (CARL) took effect. Hijo chose to avail of the 10-year deferment period coverage. Under the supervision of the Department of Agriculture (DAR), the company entered into a production and profit-sharing scheme with the worker-beneficiaries.

Three cooperatives were created in preparation for the turnover of the farms under the CARP Law. Each of these cooperatives entered into a marketing and production contract with Hijo for their respective production.

In 1994, as part of its compliance to the CARP Law, the companies offered the plantations to DAR for a Voluntary Offer to Sell (VOS) basis.

The companies went into a transition from banana production as its core business to the marketing of bananas and pier operation.

In 1997, Hijo and APO filed just compensation cases on the land surrendered under the VOS which were undervalued by the Land Bank at the time of purchase.

A long term contract was entered into with Lapanday Agricultural Corporation in 1999 for banana sales and marketing, port use, lease of port facilities, use of airstrip and shipping road.

In 2006, the Tuason group bought the shares of the JVA group under a modified leverage buy-out.

On June 30, 2009, marked its 50 years journey. The corporate life of Hijo Resources Corporation started to flourish and continues to leverage.

Resilience in the face of challenges has been Hijo’s driving force to succeed in the agribusiness industry. In the past years, there have been changes and upgrades in Hijo’s focus, aside from the banana plantation and Hijo’s port, Coconut plantation and a venture in Leisure and Tourism was also established.

In 2011, Hijo experienced a significant increase in revenue for Banana Operations, reaching its maximum production capacity. This achievement has allowed the company to lead the country’s export of bananas to Japan, Korea, China and the Middle East.

Consistently, proof of Hijo’s resilience is this important rise of Coconut venture, and the remarkable capabilities of Hijo Research and Development. Food Processing is also worthy of attention. In the same year, Food processing has finalized the branding of Twin Rivers products.

Hijo’s venture in Leisure and Tourism proved to be its greatest source of growth, earning 200% in revenue. With a newly developed brand identity – Hijo Estate Resorts.

As the old businesses, port and agribusiness, undergo transformation to be at par with the trends of its respective industries, Hijo’s new business takes flight and flourishes. Truly, this is a set off from a well-harvested year.

In 2013, the acquisition of new banana hectares happened. Also, Food Processing’s expansion to new export clients and revenues were at an all-time high for the Leisure and Tourism department.

The creation of Hijo Logistics Services (HLS) was inked in 2013, with six new hauling trucks brought in to provide hauling and transfer services for both Hijo and other Davao-based firms.

The years of Hijo continues to prosper.

Last year, 2018, Hijo initiated the Farm Organization Rejuvenation Development (FORD) Project that supports the call of the government in regularizing pertinent work positions, which is geared towards a stronger organization and even more empowered workforce.

Consistently, another project has evolved, the Honeycomb Project. It is a breakthrough in the food manufacturing industry and in producing value-adding natural products and will soon be rising after the groundbreaking and time-capsule laying that happened in April 2019.

This year is Hijo’s focal point on hypergrowth towards Hijo 2021 success.

This Philippine company changes the world.